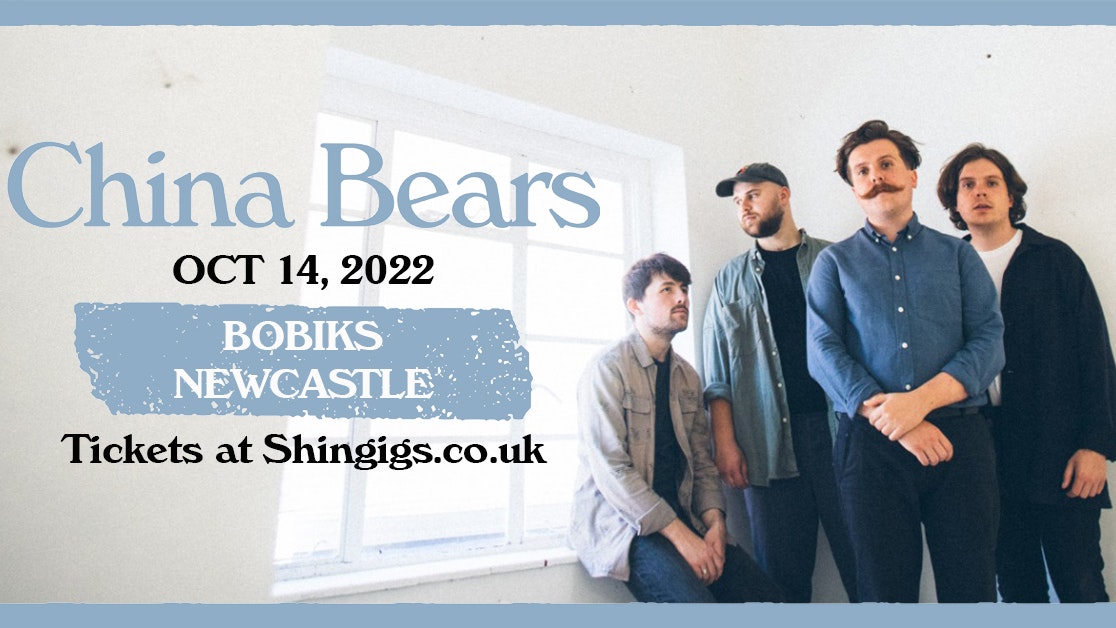 China Bears Bio 2022China Bears consist of twin brothers Ivan (guitar / vox) and Frazer (guitar) alongside bassist James and drummer Dean. Their latest single is called ‘Back To How It Was’ and classic China Bears it was, too – all trembling guitars and mournful vocals building to a thoroughly piqued peak.’Back To How It Was’ is also taken from the forthcoming China Bears’ third EP ‘All That Distance’, which is due out in September followed by a UK tour in October, including a headline show at London’s Moth Club – full dates below.

The summertime will see the release of a brand new EP track called ‘Someone Kill This Party’, which encapsulates the increasingly vigorous, ever-vivacious China Bears live show, a set full of melodic thrust and half-maddened emotions, with emboldened singer Ivan driving the band onwards.You get the sense that for China Bears there is little time to waste. One of the many, many casualties of the Covid 19 impact on SXSW ‘20, China Bears were then supposed to find some solace playing a springtime tour of the UK…which then got rescheduled for September…which was re-rescheduled for spring 2021…which finally took place in October last year. Making up for that lost time the Bears have hurtled into 2022, headlining a sell out show at The Lexington in London in February and storming through official showcases at SXSW in Austin, Focus Wales and The Great Escape in Brighton.After self-releasing 3 singles the alt-indie five-piece teamed up with Fierce Panda Records for the release of the EPs ‘I’ve Never Met Anyone Like You’ and ‘Statue Still’, picking up attention from the likes of BBC 6 Music, BBC Radio 1, BBC Introducing, Gigwise, NPR & Radio X.

Along the way China Bears have played extensively around the UK, with notable support slots for bands such as: Genghar, The Districts, To Kill A King, Geneva, Neon Waltz and The Howl & The Hum. Next up they head out to these fine venues here, here and there…