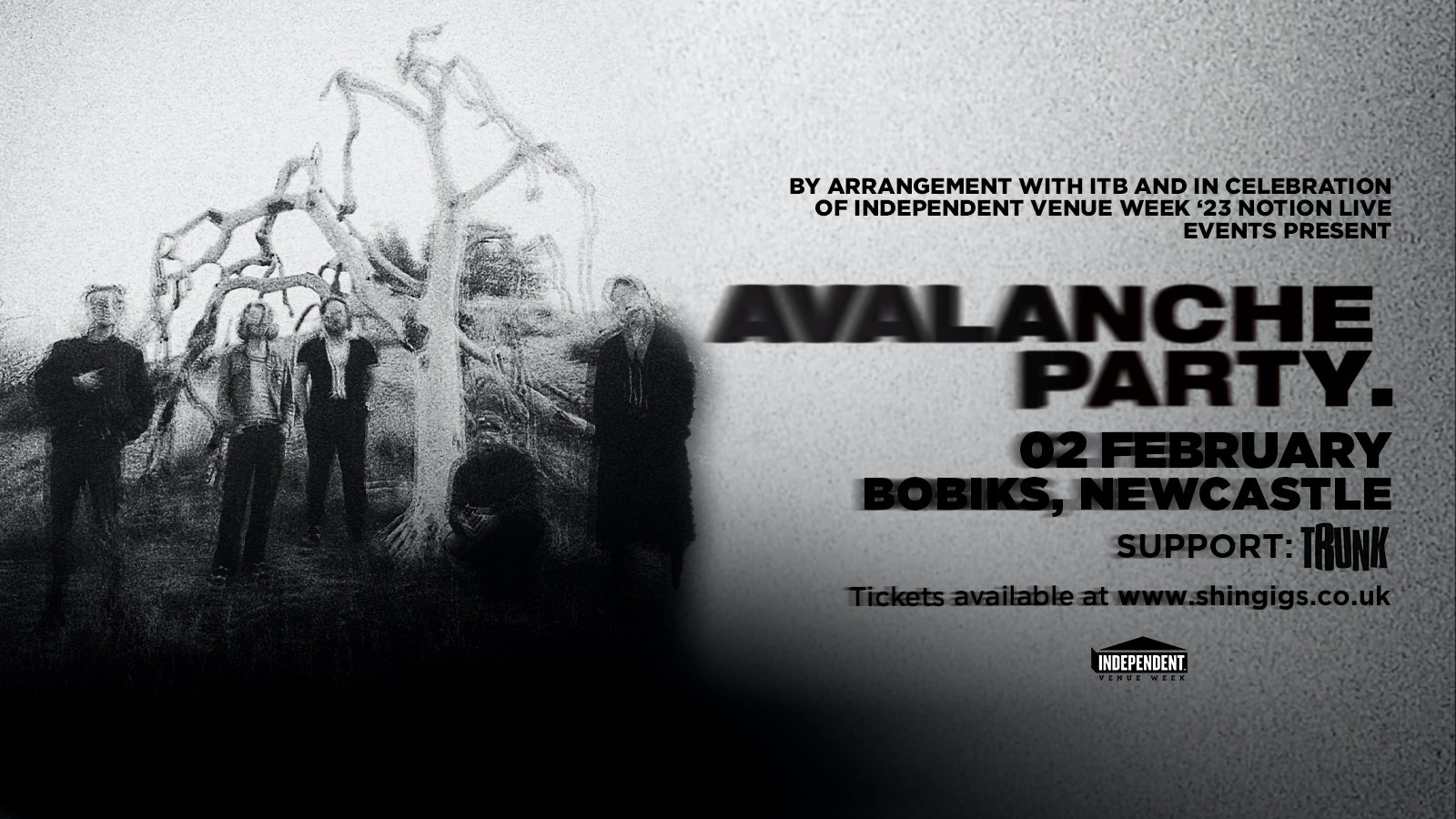 Bobiks offer 10% off food with a ticket 🍔

Avalanche Party are a garage-punk rock and roll band from the North Yorkshire Moors. They released their long awaited and critically acclaimed debut album ’24 Carat Diamond Trephine’ in 2019, which was supported by Steve Lamacq, Huw Stephens & Tom Robinson at BBC 6Music, Jack Saunders at BBC Radio 1, John Kennedy at Radio X, BBC Introducing, Vic Galloway at BBC Scotland and Kevin Cole & Cheryl Waters at legendary American station KEXP. The band recorded live sessions for BBC 6 Music and KEXP, and were named by NME as one of their Top Bands of 2019. PRS Foundation also presented the band with their Momentum Fund Award.

Shortly after the release of their debut album the Earth went on a great pause and all touring was cancelled. Avalanche Party immediately turned their attention to writing the next album. Using the enforced spare time they built a studio in a dusty basement underneath a venue in Middlesbrough. The band wrote, practiced, filmed sessions, recorded demos and handmade merch day and night in their new home. It was the most creative and fruitful period in the band’s life and forged the material for their new album – DER TRAUM UBER ALLES.

The great flood of Middlesbrough in September 2022 wreaked havoc on the band’s new base. Equipment was saved, studio space was not. Austin, Texas allies …And You Will Know Us By The Trail of Dead took Avalanche Party on a hell ride across Europe playing in twelve countries. From Munich to Madrid, Copenhagen to Cologne, Basel to Berlin Avalanche Party played their new material every night, each gig seeing each song getting leaner and stronger.

Tour over, the band flew out to Joshua Tree, California to record their new album with Dave Catching at Rancho De La Luna. Albums have been forged in this studio by the likes of Arctic Monkeys, Queens of the Stone Age, Iggy Pop and countless others. It was a mighty partnership and an incredible recording process.

Avalanche Party have been invited to play at SXSW music festival in Austin, Texas in March 2023. Following their appearance at SXSW the band will be releasing DER TRAUM UBER ALLES and supporting the record with heavy touring across the UK, Europe, America and beyond.

The first release from the album will be in January, with a tour in the UK following it for Independent Venue Week in early Feb 2023.

There is no stopping this train.

“A tsunami of mega-riffs and ear drum popping bass lines. Definitely don’t wear your Sunday best to one of their raucous gigs” – NME

“An absolute tour de force, their boundless energy and breath taking performances truly sets them apart. By far one of the most thrilling bands you will see in the UK” – Louder Than War